A plea to Christian leaders, to lead Christians in responding to the challenge of same-sex marriage. 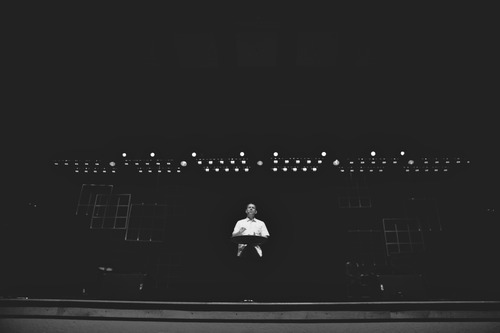 “Marriage is the exclusive union between a man and a woman.”

It wasn’t so long ago that making a statement like this wouldn’t even raise an eyebrow. In fact, if you’d said this, most people would have responded with a ‘Yes, and?’. It would be liking stating that the sky is blue, or the Australian cricket team had been disappointing. Today in Australia, this is perhaps the most controversial statements you can make. Don’t believe me? I’ve got a challenge for you. Post this to Facebook now:

“Marriage is the exclusive union between a man and a woman.”

I know very few Christians who would be brave enough to say this on Facebook - or anywhere else for that matter. There is no faster way to lose friends, be the object of scorn, or, in the case of one of my friends, be uninvited to a wedding. Sadly, I see more Christians willing to apply a rainbow filter to their Facebook profile picture than to speak out in defense of marriage as the lifelong, exclusive union between a man and a woman. As Christians, we believe this to be marriage, don’t we? We believe that what God says is not only true, but also said in love for the good of the world He created. So why are we so unwilling to say so? I believe it’s fear. Christians fear being labelled “homophobic”, however wrongly that label is applied. No one wants to be called a homophobe, and Christians are hyper-sensitive to this charge. Christians are bending over backwards to avoid any accusation that they don’t love people who identify as homosexual. But opposing same-sex marriage is in no way a reflection on their feelings towards homosexuals. Why? Because even homosexuals have spoken out against same-sex marriage! Take for example Paul Rosnick writing in The Federalist “I’m gay, and I oppose same-sex marriage”.

“As a 30-year-old gay man, one would expect me to be ecstatic. After all, I’m at that age where people tend to settle down and get married. And there is nothing in this world I want more than to be a father and raise a family. Yet I can’t seem to bring myself to celebrate the triumph of same-sex marriage. Deep down, I know that every American, gay or straight, has suffered a great loss because of this.”

If people who are homosexual can oppose same-sex marriage, it’s clearly not an act of homophobia. More broadly, Christians fear being hated. It’s not pleasant, and although Jesus promised it (over and over and over again), most of us in the West have never experienced any signifcant persecution for our Christian beliefs. To suddenly be abused as a bigot or told to “kill yourself” is confronting. The fear is palpable. It has largely silenced Christians across the nation - from the pew-sitter to the denominational leader. And yet, Christians are crying out for leadership on this issue. In the last week I have had several conversations with Christians who have lamented the deafening silence of Christian leaders in this debate. As I have collected a growing library of articles on this important topic, I have discovered very few Christian leaders speaking out on why marriage should remain between a man and a woman. Nor are they speaking out on the need to protect the rights of Christians to act according to their beliefs, should the definition of marriage change. In fact, people who don’t share the same foundation of our convictions (for example, Human Rights Commissioner Tim Wilson and newspaper columnist Andrew Bolt) have often been more vocal and articulate on these matters than Christian leaders. Why is this? Why is there so little leadership on such a critical issue? Why are our leaders not speaking out, and equipping Christians (both in training and by way of courageous example) to do the same? My dismay is also shared by Matthew Parris. Writing for The Spectator “As a gay atheist, I want to see the church oppose same-sex marriage”, he is damning of the Christian response (in this case, in the United Kingdom):

“Even as a (gay) atheist, I wince to see the philosophical mess that religious conservatives are making of their case. Is there nobody of any intellectual stature left in our English church, or the Roman church, to frame the argument against Christianity’s slide into just going with the flow of social and cultural change?”

He continues with a clarity and understanding of truth that has sadly been lacking among many Christians:

“What has the Irish referendum shown us? It is that a majority of people in the Republic of Ireland in 2015 do not agree with their church’s centuries-old doctrine that sexual relationships between two people of the same gender are a sin. Fine: we cannot doubt that finding. But can a preponderance of public opinion reverse the polarity between virtue and vice? Would it have occurred for a moment to Moses (let alone God) that he’d better defer to Moloch-worship because that’s what most of the Israelites wanted to do?”

As he concludes, his words cut to the heart:

“Have some of us…made the mistake of taking the church at its word? Was it always, anyway, about going with the flow? Was it always secretly about imposing the morals of the majority on the minority — so all that is necessary is to discover which way the preponderance falls?”

Of course, this is not the case. But the world may be easily be forgiven for thinking so. I long for and pray for myself and others to be filled with the conviction of saints of old, men like John Bunyan, who could say:

“What God says is best, is best, though all the men in the world are against it.”

So I plead with Christian leaders across our nation - please lead us. Lead us in prayer. Teach us to speak with courage and love. Equip us to live not in fear of man, but for the glory of our persecuted and now risen Saviour and Lord. And please remind us of these words:

“Who is going to harm you if you are eager to do good? But even if you should suffer for what is right, you are blessed. “Do not fear their threats; do not be frightened.” But in your hearts revere Christ as Lord. Always be prepared to give an answer to everyone who asks you to give the reason for the hope that you have. But do this with gentleness and respect, keeping a clear conscience, so that those who speak maliciously against your good behavior in Christ may be ashamed of their slander. For it is better, if it is God’s will, to suffer for doing good than for doing evil. For Christ also suffered once for sins, the righteous for the unrighteous, to bring you to God.” 1 Peter 3:13-18

The time to speak is now. So speak, and help us to speak, while we can still say our piece.

8 Helpful Books on Ministry Burnout
7 Imbalances to Watch Out For In Church Leadership Teams
25 Traits of a Bad Leader
15 Quotes on the Importance of Shaping a Healthy Church Culture
Book Recommendation: Organizing Love in Church